Average Position Is Gone. What Will Replace It?

Today marks the end of the average position metric in Google Ads. For those unfamiliar, average position told advertisers where their ads showed on the search engine results page. An average position of 2, for example, meant that an ad appeared, on average, in the second ad position on the page. That kind of information is still key to the success of a well-run SEM campaign, so as soon as we were finished mourning the loss of this classic paid search metric, we did some digging into the new metrics from Google for ad position.

Impressions (Top) % is defined as the percentage of impressions that appear above organic searches. In other words, this metric tells us, when your ad shows, how often it shows “above the fold”. 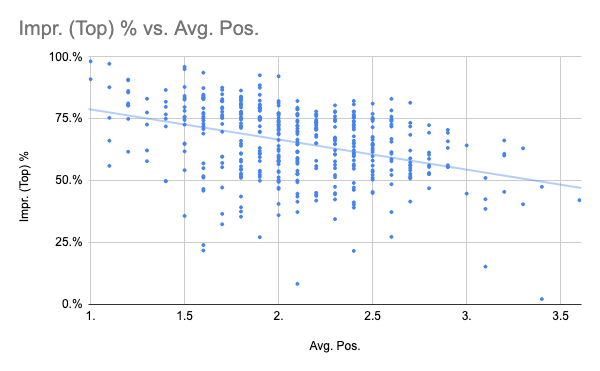 2019 data from 425 of our campaigns with over 10,000 impressions showing the relationship between average position and impressions (top) %.

Impressions (Absolute Top) % tells us what portion of impressions appear in the top ad position, or, to put it in terms of average position, how often your ads appear in position 1. This metric is helpful for branded campaigns and assessing other strategies that rely on dominating the SERP (Search Engine Results Page). 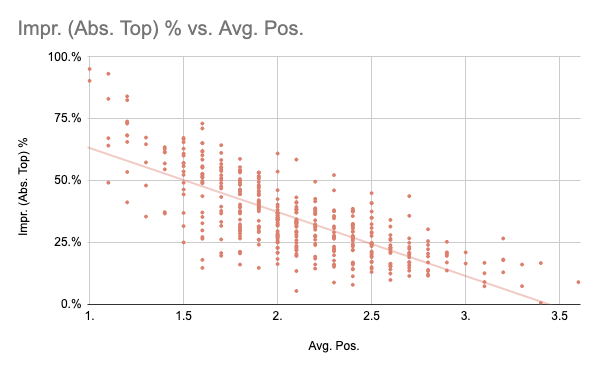 2019 data from 425 of our campaigns with over 10,000 impressions showing the relationship between average position and impressions (absolute top) %.

And ultimately? If you have high-quality conversion tracking down to the keyword level in Google Ads, where you appear on the page matters much less than conversion rates and cost per clicks for your keywords. Conversions—revenue, really—are what matters at the end of the day to businesses.

But sometimes granular conversion tracking isn’t possible, in which case you used to rely on average position to ensure you were bidding competitively in your market. For example, one rule of thumb is that unless you can prove that a keyword is providing value—driving conversions—you don’t want to appear above position 1.5. Allowing for some “headroom” is important; otherwise, you can drive up the cost of that keyword in your market.

Now that average position is gone, you have to get creative with Google’s new metrics to gauge the efficacy of your current tactics. Translating an average position of 1.5 to the new metrics is relatively simple; this means you are most likely appearing in position 1 about half the time, which would make your Impressions (Absolute Top) % approximately 50% (as seen on the chart above).

Another way to replace average position is with competitive metrics. Competitive metrics such as Search Impression Share give you real insight into how often your ads are showing, as well as why they aren’t showing 100% of the time. Because Google Ads is a competitive marketplace, it is essential to understand these metrics in order to answer questions like “How much more could I spend in this campaign?” and “How effectively am I spending my current budget?”.

We apologize in advance for how confusingly these are named. Here are the three main competitive metrics found in Google Ads*:

We choose to use Search (Top) Impression Share (the competitive metric) in the majority of cases because it simply gives you more information. Because it includes “eligible impressions”, it helps us answer similar questions to average position—how often you are appearing at the top of the page—as well as larger, more strategic questions about an account.

Although we are always sad to say goodbye to a trusty metric, we at Chair 10 Marketing are excited to continue to provide thoughtful analysis for our pay-per-click clients using the most powerful metrics at our disposal. Reach out to your account manager today if you have any questions about this change or how it will impact your accounts.

*You can also find these metrics in Microsoft Ads, although some have slightly different names.

The Case for Reputation Management

January 09 / Emma
Contact us today to learn more about our digital marketing services!
Learn more
Back to top